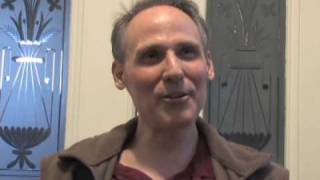 Participant: I have three small questions [David laughs] about the second level of what’s going on here: the Heart thing.

Participant: Is it contagious?

Participant: Because that’s what I was wondering.

David: It should be like, you know, Ebola. [Laughter] It should take you to the end! [Laughter]

Participant: Is it something you switch on in here?

David: I don’t know what you mean by “in here.” Please clarify.

Participant: Great. Well, when I’m near you, it feels like I feel It or sense It or experience It a lot.

David: You should write a rock song about this. [Laughter] Do you like music?

David: Can you write lyrics?

Participant: I haven’t yet, but…

David: I feel you should because it’s about being close to me and I feel this. [Laughter] “I think, I think we’re alone now. [Laughter] There doesn’t seem to be anyone around…” [Laughter] “Our beating hearts.” It’s like that. It should be like that, with us, with all of us; very intimate, like that, and stimulating and romantic and beyond.

Participant: Ok, but when I’m not around you…

David: Oh you’re… oh, I don’t want to talk about that. [Laughter] I can see nothing fascinating in that topic. It’s like you just put a knife in the whole thing. I mean what would we possibly talk about if I’m not there? [Laughter]

Participant: Well, maybe it’s all going on like you said, but subtly.

Participant: Because it feels like it is, or could be.

David: Yes, you may recollect now that it’s been going on and on even since you’ve been gone last year… that whatever this is that “David” does, it’s quite primeval.

Participant: Yes. “Since You’ve Been Gone,” that’s a good song too.

David: That’s a good song too.

Participant: But, can we be awakened and not even know because it’s so subtle?

David: Of course! Of course! You are! Everyone is! Everyone is awakened and what awakening or enlightenment is re-knowing that you’ve known. It’s re-recollecting that you’ve always been That. But it might feel at some point in your development like you really are awakening for the first time, like you’ve been almost dead or comatose before. When the first flashes of Consciousness happen, the first thing you say to yourself is that “I’ve never been alive, I’ve never even been Conscious before. I’ve been asleep.”

Participant: But that’s what happens, kind of, truthfully, you know.

Participant: And then it feels like, “Oh, I’m awakened.”

David: Yes, you are! Let’s talk about that. That’s what I want to talk about.

Participant: But then maybe it gets so subtle that…

David: Yes! Then you should go back into your normal mind, see, when your ordinary mind returns (and) its nature is to camouflage That — listen carefully — so you never have That as a constant possession, like a gem that you can pull out and say, “Oh yeah, I really am enlightened.” [David mimes putting something into his pocket.]

So next time you go in [David searches his pockets], “Oh my God, I’ve lost it!” [Laughter]

No really, the mind is insane because the mind only knows what begins and ends. So if That comes into that part of the mind that only knows beginnings and endings, it will be turned into an object that can be gained or lost.

Now we’re talking about the non-dual here. This is Jyana Yoga.