Conjunction of Shiva and Shakti, September 9, 2011

Now you can feel the Shakti. The Shakti’s beginning to really move now. Because wherever Shiva is, she’s not far behind. So if That alone is, she hears that there’s a place where only That is, she won’t waste too much time in getting there. In other words, she is he.

What good is an ocean with nothing swimming in it? What good is the ocean of quietness if no one’s going to enjoy it? So Shakti comes wanting to enjoy the bliss of Shiva, and Shiva loves it. Shiva despises that aloneness.

If you read the Vedic myths behind Shiva, he’s sex mad. He’s out of his mind with desire all the time, symbolic of his inability to deal with his own unfathomable aloneness. I’m not advising you to become a sex addict to deal with your spiritual aloneness. I’m simply talking about mythology here. But he’s always wanting to, Shiva is, revel in play with Shakti. He’s waiting for his cosmic playmate.

Remember, Shiva is the perfect meditator. What does he need a relationship for? He’s totally undefiled in and as the Absolute. What does he need anything for? He doesn’t need anything. But somehow that play magnetizes around him, around his being. It’s all one. Shakti’s just a concept for the inevitability of the play of the relative and the permeation of the absolute into the relative as energy. So, that it doesn’t just remain arid and dry and event-less, cool, detached, inactive.

Shakti comes as ecstatic joy, a wave of it, into and beyond Shiva, as if causing Shiva to leave himself as her, as Shakti. That’s because it’s not enough just to be the Absolute. The Absolute is defined as vacancy, what could be there to produce any happiness? There’s no happiness. It’s the conjunction of relative and absolute and the inherent understanding that they are one and two that gives real joy; one and two. So you want two to be active. You don’t want to push two into inactivity. You don’t want to get caught up in the denial of relativity. That’s a loser’s game.

You can feel Shakti now. You can feel her kiss of energy. Is everybody getting some radiation, some potency, Shakti? Good. 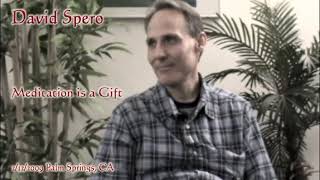 2:02
Meditation is a Gift, February 12, 2009
Whenever you take something strain is involved; as in reaching for something and taking it and pulling toward you. That same principal applies to meditation. If your individuality meditates, their will be a resistance, a strain, or a friction ...
Consciousness, Meditation
26 views

2:43
Focus on What You Love, Not What You Fear, March 17, 2009
Moderator: A southern California viewer says, "The vasanas is like the software we come with. Is there a way to destroy this or [do] we have to go though the experiences in life and exhaust them?" David: You can focus on a place where Reality is ...
Bliss, Compassion, Liberation, Self
20 views
123…6»