You see, once your path to Consciousness has opened sufficiently, then Consciousness will conclude your process. You don’t need to worry.

There’s only so much opening you need to do. Once you cross that threshold, then it’s just a question of a certain amount of time before your standing in that “quicksand” begins to culminate. So, I think you know what I’m talking about, if you have practiced a powerful form of sadhana. Once you’re in this you can’t get out. There is no exit.

So, once you know you’re caught like that, then surrender will happen automatically. Once you know that the Supreme has unveiled Itself to you in such drastic terms, then it’s only a question of time before you will find that your life is fully immersed in that Consciousness. It just happens gradually. There’s nothing you can do to rush it.

Or, just letting the Master love you, letting the Bliss that the Master exudes enter you – and you enter Him or Her – and then there is this miraculous Oneness that is created.

But that latter process is the activity of Love functioning — in surrender. Only in the beginning are the machinations of the mind all stirred up to do something, to liberate itself or to become free.

Later on, it becomes a simple process of merging with what already is, with what you already are, what you are destined to become. 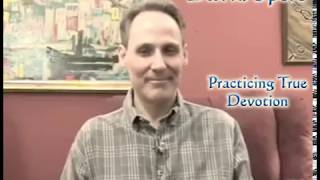 3:25
Practicing True Devotion, August 28, 2008
August, 28, 2008 Devotion can't be practiced! You cannot rehearse, and then perfect it, because the very nature of devotion is the pure immediacy of instantaneous feeling. It's the Bliss of Total Feeling: saturating and then radiating, ...
Bliss, Compassion, Consciousness, God
27 views
123…11»