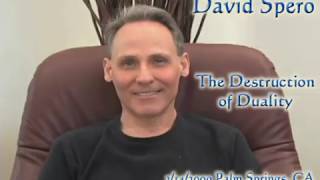 Moderator: A viewer in Hawaii says, “I love it when you talk like that, I’m feeling it.”

David: I only talk like that when I’m feeling it. You see you can be this all the time and still undergo various bavas of recognition within it. Being within it all the time includes the total eclipse of that which you call Enlightenment, of that which the scriptures call Enlightenment. Just as in the stages of the moon there is the total disappearance of the moon, there is no moon and then there is the fullness of the moon. The moon is always there. Consciousness is always here, [pointing to his heart] nevertheless it has its own way of still intoxicating beyond the already existing and infinitely existing Presence of Itself.

Moderator: A viewer asked, “Can this bliss or this higher frequency of energy, energy of awakening, be used to heal others physically?

David: Where would you be? Where would you still exist where you could act as a healer? If you in this condition now, where would you actually be? Could you act as an instrument, that is, put yourself between this and something else? Or is there no longer any other something else? Is there only That? The object is That, the subject is That and that which is between the subject and object is That. There is no other space anywhere. This is the destruction of duality we are talking about here. This is transcending duality but it’s That which does it, That with a capital T. It’s not my mind.

Look now, look within you for the changes and the signs of your total revolution in Consciousness. Find whatever sign however miniscule, however profound, don’t over look it because it’s in that recognition that you begin to learn that you begin to understand. If you keep bypassing your own understanding, if you keep glossing over it and flitter away in the mind to some idea, you are not going to understand what you’ve been given in this moment. It’s not enough for you to receive it. You also have to recognize it.

When you travel from one country to another you need a passport, you don’t just show up and say here I am. Don’t you see me? You have to actually produce something that corresponds to who you are. That analogy corresponds to the knowledge that you have recollected with your mind; that which you always are. That recollection is not some false representation of who you are merely because it’s recollected and it’s in the field of recollection. It’s only in the field of recollection that you can then be the Timeless within time. So you don’t want to kill your mind completely. If you kill off your mind completely – listen my friend in Israel – if you kill your mind off completely, you won’t have the ability to have the subtle recollection that you are That all the time, because all the time means also in time. Now, how else are you going to know that you are completely liberated unless in some way your intellect has adjusted itself in the field of knowledge to accept that. Knowledge is necessary for that. Now I know this is a slippery slope and this can be interpreted as just spiritual babble… it has no meaning… I’m talking to myself. Yes I am talking to myself at this point.

3:39
Attention and Consciousness, July 26, 2008
Even though attention appears to be bound, it can and does still carry the total force of Liberated Consciousness - because its root is in There. It's rooted completely in that Unmanifest Being. The nature of that transformation from bound ...
Compassion, Consciousness
28 views
123…12»