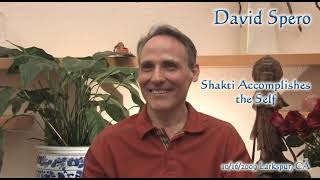 By simply feeling this current of eternal Bliss that is manifesting right now, it will enlighten you. It has that potentiality. I’m not promising it. I’m just saying that it has that full potentiality within it that’s safe. And what it will do as it circulates, it will begin to expand out in your head. Your consciousness will begin to swell out. Your auric field will get wide and big. That’s the sign that your consciousness is opening, and then in there is the Self, that’s the Self. That’s the closest you can get to the Self, either when thought disappears, that is you transcend thought completely, or you feel the intense total Shakti envelop you, drown you in itself. Every once in a while I’ll look out at someone. I’ll notice they’re intoxicated on the Shakti, and I’ll feel that they’re also in the non-dual. I can recognize it immediately. I may never tell you I saw that in you, but I will see it occasionally. The Bliss just bursts its seams and just bursts its limitations out, and there’s only that effulgence of the One. It was the Shakti that gradually accomplished that. Shakti accomplished Shiva. Current attained Absolute Being.

The whole world is going one way, and I’m going another. The whole world is caught in history, linearity, progression, and I’m going another way. So, the atmosphere that is in the world at large is anti realization. It’s not pro-realization. It’s highly anti. So, when you come here, every time and to some degree, we all take a little of that distorted, disturbed world in here with us because we’re part of it, and it’s not different than us. There’s a little war that goes on. The Shakti aggressively wants to move in and make you ready for this kind of absolute purity. We’re not talking moral purity here. We’re talking existential purity. So, every time you come in, there’s an eradicating force that needs be present to rectify all the negative karmas that we bring in here. The Shakti accomplishes that beautifully. It’s like a little battle that goes on because you’re still pulling the way of the world. I’m pulling a little bit the way of the world. We sit in the midst of this greatness. It manifests, and it straightens everything out.

Now you can appreciate how precious the teacher is, not that they’re special, not that they need to be given things, not that they need to be given money or power or position or title, but by virtue of their function, what they actually accomplish in a given area, in a given context, in a room like this, now that’s something. Of course it’s not them, but in some mysterious way the movement of that supreme Consciousness is connected to their existence in a way that’s unfathomable. It’s not understandable by the human intellect, which is why the only way to approach this is truly with surrender, through deep divine surrender into one’s own sacred Being.

12:27
Abiding Radically / U. G. Krishnamurti, January 30, 2010
It’s just the flow of wisdom as it is emerging out of your own Self, and it has devastating impact. The way it distinguishes itself from ordinary knowledge is that it carries what I would call the power to cause you to interface back onto your ...
16 views

4:50
Shakti Is Non-Dual, January 29, 2010
You should begin to start feeling good all over as the Shakti, the energy within the Absolute begins to impinge on your body-mind. The Absolute is not happy just to stay in the void. It wants to start spraying up in devotional waves so you ...
16 views

12:08
The Golden Pathway, January 29, 2010
There are two kinds of knowing, inner knowing and outer knowing. This may sound elementary, but it’s actually very profound. Outer knowing is when there is a felt distance between the knower and that which is known, you could say a spacial ...
10 views

7:00
Full Tilt Into the Total, January 22, 2010
David: What we are really craving with the whole essence of our lives is Consciousness. Even your physical hunger, your emotional desires, your intellectual needs are metaphors or secondary manifestations of this desire to merge into ...
25 views

9:22
Sahaja Samadhi Is Unstrategized Liberation, January 12, 2010
Full awakening itself is qualityless when we’re talking about full realization of the Self, which means that you know that you are Pure Consciousness and everything else is also Pure Consciousness. That’s the highest state of realization you can ...
67 views

14:35
Voyage Toward Liberation, December 1, 2021
Moderator: From a participant in India, “Namaste. Thank you for the blissful transmission. What role does morality, ethics, and being a good person have on the spiritual path, or is that an ego trap?” David: It can be relevant or it can be a ...
96 views

17:55
Beyond Captive Meaning, September 1, 2021
Participant 1: I am very grateful for your presence, David. I experience deep peace and enjoyment in your meditations. I am curious to clarify what you mean when you use the word “Bliss.” David: I use it for the most part as the Hindus use it. ...
43 views

10:47
Release Happens, August 18, 2021
Participant 1: Can you say something about worshiping the Infinite as the Divine Mother? David: That’s what we’re doing here. The Divine Mother is not a person. It’s not a deity. It’s spoken of as a deity symbolically, but it refers to an actual ...
88 views

13:28
Pure Knowledge, May 12, 2009
Participant 1: Every time I try to meditate there is another being that arises. I experience powerful vibrations and am not able to meditate. David: Why do you call it another being? You also referred to it as a vibration. I’m not sure what ...
45 views
123…19»