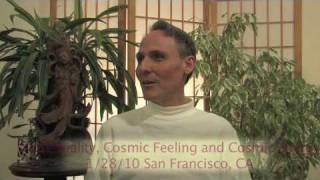 David: Now, in addition to Atman and Brahman, can you feel the shakti? Can you feel this current? ….this power?

David: It’s not “sort of”. Get rid of “sort of”, that’s in the field of “maybe”. It’s polite, but it’s inaccurate. It’s that vibrating bliss. Now, you know what Atman is. Now Atman is like jelly, you can shake it. You know when you hit jello it goes like that [shaking his hand]. So when the shakti, when the self is full and Absolute like a gigantic ocean, out of that realization might emerge this ferocious current. It’s the mother, it’s an aspect of the mother. It’s Shakti-kundalini or Prana-shakti. Just like the ocean can rise up in waves bursting on the shore against the rocks. It’s a big show of spray and delight and vapor and mist and foam. It’s very blissful. You’ve been to the seashore when it’s like that? Other days there is nothing. So, this power of the oceanic Self can rise up in vibratory currents. That’s what you are tasting. It’s just the Absolute in a different form. The Absolute transforming itself into pure energy and initiating that way. It’s very ….

Participant: And then that naturally becomes the experience of devotion.

David: It can. It can. Devotion is actually a third and distinct aspect of the self, it’s feeling. So you’ve come upon something interesting. I talk this way quite often, that there is the quite silent atman. There is the vibratory rushing Kundalini-shakti, the mother energy, and then there is feeling. Feeling is distinct from energy. Feeling and energy are two different things. But just as you can ride the wave of energy into the Absolute or feel it as it comes out of the Absolute. You can also feel love in the context of that oceanic cosmic existence. In which case, it becomes bhakti or even better, para-bhakti, supreme devotion, “para” is super. It’s devotion on steroids.

Participant: So when I experience the, the vibrating bliss it’s, it’s non-localized.

David: Of course. The shakti too is non-dual. Yes.

Participant: But when then when we, you’re talking about the devotion then, is that, do you feel that literally coming from the heart or is that also non-localized?

David: That’s also non-localized. It’s not from any human. It’s the universe itself that is non-duality, cosmic feeling and cosmic energy. Even though it’s un-manifest, it has these three qualities going on within it apart from any human’s experience of it, although we can’t really talk that way seriously, because we’re humans and we’re talking in the context of that understanding. In other words, who would be telling you if I didn’t?

Participant: Ok, I think I just got something I never got before.

3:39
Attention and Consciousness, July 26, 2008
Even though attention appears to be bound, it can and does still carry the total force of Liberated Consciousness - because its root is in There. It's rooted completely in that Unmanifest Being. The nature of that transformation from bound ...
Compassion, Consciousness
28 views
123…12»